Sir Bowen is a knight of the Old Code and one of the main protagonists of Dragonheart.

Bowen was a knight who believed strongly in the Old Code and followed it strictly. Queen Aislinn hired him to instruct her son Einon in the ways of knighthood, in the hopes that it would make him a better king than his father, Freyne.

When Einon was injured in a battle, his mother led her soldiers and Bowen as they carried the prince to a dragon who, at the pleas of the queen, saved the prince by sharing his heart with him. Bowen swore an oath to come to the dragon's aid for saving his student. Alas, Einon turned out to be no better than his father, if not worse.

Horrified by his old student's tyranny, Bowen instantly blamed the dragon, believing his heart had poisoned Einon, and swore to hunt him and his kind down, becoming a vicious dragon-slayer. In truth, Bowen did not want to accept that his student (whom he had loved and guided) was always a monster, which is why he shifted the blame to the dragon. Bowen would not realise the truth about his former student until Einon engaged him in a vicious duel at the river.

So Bowen teamed up with Draco to destroy Einon. Unfortunately things didn't go exactly according to plan as Einon still managed to survive him. Bowen engaged him in a second duel which was more vicious then the last. Bowen freed Draco from his chains, but Draco pleaded with the knight to kill him as it was the only way to end Einon's reign. At first Bowen was reluctant to do the deed because Draco was his friend. But when Einon charged at him with a dagger in his hand, Bowen quickly killed Draco, and, by extension, Einon. He was one of those who witnessed Draco's ascension to the Dragon Heaven and becoming a star. Afterwards, Bowen became king and with Kara ruled the land for a period of justice and brotherhood.

One year before his death, Bowen visited the cave-home of Draco, and there he discovered a dragon egg. He took the egg to a monastery where his friend Brother Gilbert, a monk, lived. The friars at the monastery pledge to hide the egg away, which would later hatch into the dragon known as Drake.

Bowen is strong-willed and responsible. He is also sometimes greedy. Thanks to Draco, Bowen regains his honor of the old code to fights what trright for others. He learned more about dragons thanks to his closest friend Draco.

"Fight with your head, not your heart." -- to Einon, during sparring practice

"Purpose, not passion." -- to Einon, during sparring practice

"There's no nobility in crushing desperate men." -- to Brok, regarding King Freyne crushing the peasants' revolt

"And when you're king, remember today and the difference between battle and butchery. And remember the Old Code. Then you'll be a greater king than your father." -- to Einon

"I served the father only for the sake of the son. All my hopes rest on him. Forgive a doubting fool. Call when you need of me. Ask what you will of me. My sword and my service are yours." -- to Draco, after Einon's life was saved

"Dragon! I loved that boy and you changed him! You tricked me, dragon! No matter where you fly, no matter where you go, I will find you! Today I make a new vow! I will spend the rest of my life hunting you down!"

"It has expenses. Honor won't feed my belly nor shoe my horse." -- to Brother Gilbert

"Why should I stretch my neck out for people afraid to risk their own?" -- to Draco

"That's one lesson you never learned--only expose your back to a corpse!" -- to Einon, while fighting him

"Who asked you to interfere? I had everything under control." -- to Draco, after his fight with Einon was interrupted

"Hope? Even if you could raise your army, do you think they'd stand a chance against seasoned troops? Last time they tried that it was a massacre. I remember. I was there." -- to Kara

"All my life I've dreamed of serving noble kings, noble ideals. Dreams die hard and you hold them in your hands long after they've turned to dust. I will not be that naive again." -- to Draco

"Save your strength for the fight against Einon." -- to Hewe

"I'm going to start one." -- to Hewe, after the latter said there wasn't any fight against Einon

"What now, Draco? Without you, what do we do? Where do we turn?" -- to Draco, after reluctantly slaying him 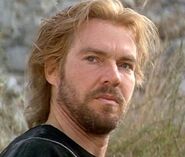 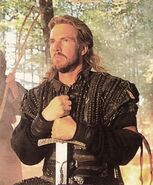