Kara is the daughter of village leader Riagon, or Redbeard, and one of the main protagonists of Dragonheart.

She encounters Prince Einon when he runs off with the crown of his father, King Freyne, following a peasant rebellion. She falls from a hayloft in a nearby building and bumps right into him, which pushes him into a wooden spike embedded into a pole, thus stabbing his heart. She readies her weapon, but she sees Einon is injured and leaves him be before he is taken away by his mentor, Bowen. Kara's father and the peasants leader Riagon is later blinded by the now King Einon's forces as punishment for the rebellion.

12 years later, Kara brings her father water while he was working in the quarry. When Einon harasses him, Kara defends her father. To punish her for her defiance, he mercilessly shoots Riagon in the chest with an arrow. Later on that week, Kara sneaks into the castle and plans to assassinate Einon to avenge her father's death. However, Einon sees her reflection in a metal plate while she sneaks around the ledge of the castle wall behind him. She jumps at him but he pins her down on the table and prys the dagger out of her hand. Einon then orders her to be chained in his quarters but she says there are worse punishments than death in his kingdom.

Later, Einon arrives in his room and recognizes who Kara is: she was the same girl who nearly caused his death. He releases her from her chains and has her knife in hand. Still enraged by her father's death, she stabs Einon in the shoulder but does not pierce much skin. Kara charges towards Einon but he pins her down on his bed and rips the knife from her hand. Then he tries to seduce her, planning to punish her by making her his queen, and leaves. Later that night, Einon's mother, Queen Aislinn, helps Kara escape.

The next morning, Kara returns to her village and tries to rally the villagers to fight Einon. However, they pelt her with vegetables. Before Hewe, one of the villagers, can throw a melon at Kara, Bowen arrives and snatches it from Hewe's hands,

He came to scam the villagers by offering his services to kill the dragon, Draco, who terrorized the village, though this is part of the scam. Since they could not give him gold, he told them that they should offer the dragon a maiden sacrifice. The villagers then attempted sacrifice Kara against her will, and Draco snatch her up and take her away. However instead of eating her, he took Kara to his cave and they became friends while Bowen waits at the village for Draco to return. Seeing that Draco didn't come back, he goes off to find him and heard him singing to Kara, in which she complements his voice. When she saw Bowen again, who was angry with Draco, she defended the dragon from him with her dagger.

Einon then arrives to recapture her and fights Bowen, declaring that he never believed in the Old Code and only told Bowen what he wanted to hear. Draco intervenes and Einon flees. Kara asks Bowen to help overthrow Einon, but the disillusioned knight refuses, since he still won't accept the truth that Einon had always been evil in the beginning.

Later at a swamp village, Bowen began another scam. When Brother Gilbert arrived and expressed his belief that Bowen had won against the dragon, which is Draco. Kara didn't believe him firmly and told Gilbert and the villagers of the swamp village that Bowen is in league with Draco, after she heard Bowen exposed their previous scam. The villagers, along with Bowen, just laughed her and the scam continued on. It went poorly and it was exposed. Draco takes Bowen, Kara, and Gilbert to Avalon, where they take shelter among the tombs of the Knights of the Round Table along with King Arthur. Draco reveals the connection between himself and Einon, stating that he hoped giving the prince a piece of his heart would change Einon's nature and reunite the races of Man and Dragon. Through this action Draco hoped to earn a place in his namesake constellation, which is a heaven for dragons who prove their worth. He fears that his failure will cost him his soul, and agrees to help Kara and Gilbert against Einon. After seeing a vision of King Arthur that reminds him of his knightly code, Bowen agrees to help as well.

With Bowen and Draco on their side, the villagers are organized into a formidable fighting force. Aislinn presents Einon with a group of dragonslayers, secretly knowing that killing Draco will cause Einon to die as well. The villagers are on the verge of victory against Einon's cavalry when Gilbert strikes Einon in the heart with an arrow. Draco feels the pain as well, falls from the sky, and is captured. Einon realized that he is effectively immortal as long as Draco remains alive, and was determined to keep it that way. Later, Aislinn attempts to kill Draco during the night, but Einon stops her and she was killed.

The rebels invade Einon's castle to rescue Draco as Bowen battles Einon. Draco begs Bowen to kill him as it is the only way to end Einon's reign, but Bowen can't bring himself to kill his friend. Einon then ambushes Kara, holding her with his sword and threatens Bowen that if he moves then Kara will die. Draco then bites one of his claws causing to Einon to scream in pain and let go of Kara. Einon then charges at Bowen with his dagger, but Bowen reluctantly throws an axe into Draco's exposed half-heart, which killed Einon. Kara then watched in devastation, along with Bowen and Brother Gilbert, as Draco took his last breath and died soon after. She then watched as Draco's body disappeared and his soul ascended to the sky, thus becoming a new star in the constellation Draco. Kara, along with Bowen, then became the new rulers of the kingdom as king and queen.

Kara is feisty, kind, jolly, sarcastic, romantic, honorable and wise. She believes in fighting for freedom and peace. She comes to see Draco as a bud after seeing his virtues, and mourns him when he dies.

This section is a stub. You can help expand this section by adding some information.

This table consists of other voice actors that have dubbed for this character in other languages. 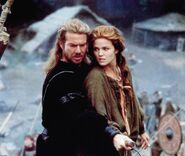