Siveth is a dragon and one of the main protagonists in Dragonheart: Vengeance. She is the sixth dragon to appear in the series, and one of the nine eggs brought to Earth by Drago.

This section is a stub. You can help expand this section by adding some information.

Siveth hatched sometime in the 9th Century A.D. from one of the nine eggs brought to Earth by Drago, and one of the lucky seven to not be sacrificed or dropped eggs. Her character was allluded to by a painted mural in Dragonheart 4: Battle for the Heartfire. She left Britannia for Wallachia, where she encountered its people and their King Razvan when the kingdom was being torn by war. During one battle the king got seriously injured, then, hearing that a dragon could bond with a human of their choosing, was brought to Siveth to be saved. But she refused, because she had already shared her heart with a dying boy named Darius after the death of his parents from the king running them off a road . Although King Razvan survived his injuries, due her refusal to help as punishment the king two weeks later banished the dragon from the kingdom. Since then Siveth was hated by everyone only referred as the traitor to anyone who mentioned her.

One day before her exile the boy she was bonded with Darius ,arrived at her cave in search of answers about his connection with her , Siveth explained the truth of how she had saved his life. the child asked her for help in finding the responsible man who caused his parents to die to get revenge but Siveth refused lied to him about the responsible man who killed his parents (was King Razvan) to protect him, in her refusal to help him Darius got very angry with the dragon left the cave causing them to be enemies from that day forward .

Twenty years later, Siveth continued to live alone in her ice cave but one day a young farmer named Lukas arrived at her cave like Darius, Lukas asked Siveth for help to find the four murderers who murdered his parents and had set his farm on fire. But Siveth refused again, advising him accept the fate his parents suffered. However, Lukas, unable to let the matter go unanswered, left the dragon in anger, vowing to bring them down himself. Not wanting him to come to harm, Siveth secretly left her cave, transforming herself into a white horse, and soon she managed to find Lukas and became his loyal steed in the search for the murderers, along with a mercenary whom Siveth discovered was a now-adult Darius.

Siveth is proven to be an admirable wise female with a strong sense of justice, believing in acts of mercy and amnesty instead of revenge, yet she can reach a breaking point, as seen when she assumed a loved one was taken from her. it is her sense of justice that has been both her blessing and her curse leading to her being banished, misunderstood and branded as a traitor by the people among her. After she revealed the truth about the king, she was finally welcomed into their society, and despite their prior treatment of her she held no animosity against them, exhibiting an essence of forgiveness and long suffering. Being a female dragon, she possess a motherly spirit as well as soul of compassion, as shown after Lukas and Darius were wounded from their final battle with the four murderers. Siveth is a cautious and attentive sort due to not trusting the king at their first encounter. Moreover the times she refused to aid in acts of revenge were in regard to the safety of others. She is brave fierce, loyal, level-headed, noble, foreseeing, sincere, and spunky with more of a sense of humor than Draco. She's also selfless, as seen in her ultimate choice to come to her companions' aid, allowing the written orders of Razvan that could've vindicated her to be destroyed.

Siveth has white and blue scales with darker undertones. She has piercing blue eyes and a facial design similar to Drago in the fourth film. She seems to be around the same size as Drago.

Siveth as depicted in a castle mural in DH4 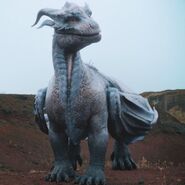 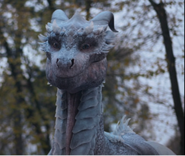 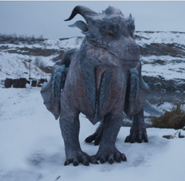 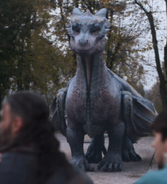 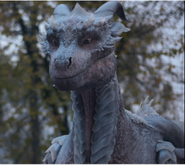 Siveth and Lukas meeting for the first time

Siveth in pain on the ground from her link to Darius 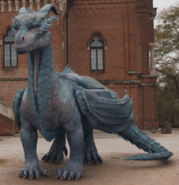